Solar power is the conversion of the sun's energy into electricity. With an estimated 173,000 terawatts of solar energy continuously hitting Earth's surface (1), there is more than enough energy to meet the world's current consumption levels of 15 terawatts per year (2). The trick, though, is collecting it.

Solar energy is primarily collected in one of two ways: photovoltaic solar cells and solar thermal. A photovoltaic cell is basically a semi-conductor connected to two electrical contacts. Photons from the sun are absorbed into the semi-conductor (usually a silicon alloy) and knock loose a few electrons. The electrons then travel through the semi-conductor creating an electrical current (3). Solar thermal is a system of giant mirrors that reflect and concentrate the sun's rays to heat a fluid, which produces steam to power a turbine that creates electricity (4).

Both methods require a large amount of sunlight. Under optimal conditions, this solar radiation, or insolation, directly strikes a solar panel without any interference. In practice, the amount of solar radiation varies depending on the latitude, time of day and season (which affect the angle of the sun); and atmospheric conditions like clouds, water vapor, and pollution (which scatter the light) (5). This is why dry areas in the mid latitudes of the globe tend to have the greatest solar potential, as seen below.

The same premise holds true for the United States. The Southwest has the highest solar potential because of its dry climate and low latitude. 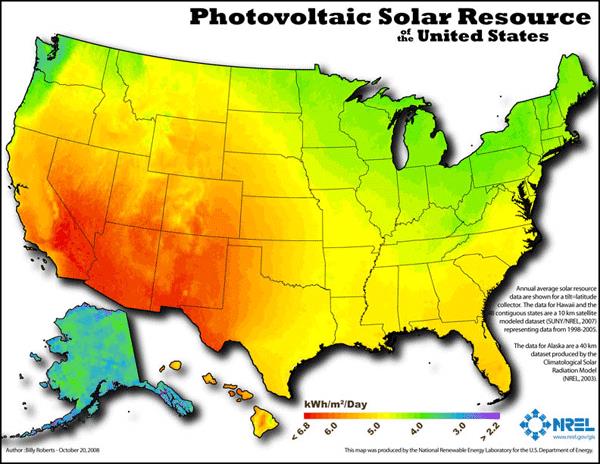 Solar power is a renewable source of energy that can be gathered practically anywhere in the world. Solar power plants don't produce any air, water, or noise pollution and doesn't emit any greenhouse gases (6) Large-scale power plants can disturb local plant and wildlife due to their size, but compared to fossil fuels, still have a lower environmental footprint. Solar power plants also have less safety risks than fossil fuel plants. Once built, solar power plants have extremely low operating costs, since their major input, sunlight, is free.

There are, however, several major disadvantages that historically have kept solar power from becoming a major supplier of energy. Solar panels can't collect solar energy at night and the amount they collect during the day varies based on the season and time of day. Solar panels aren't very good at converting sunlight to electricity - most solar panels have at best a 20% efficiency rate (7) And their costs are high. For a homeowner wishing to install solar panels on their house in the U.S, the average cost for a typical system is around $20,000 (8) For power plants, solar photovoltaic costs 11 cents per kilowatt hour. Compare this to a conventional coal plant (9 cents per kilowatt hour) and natural gas (6 cents per kilowatt hour) (9).

Costs, though, are plummeting. In 2010, the cost was 21 cents per kilowatt hour, nearly double what it is today (10). In countries such as Germany, Italy, and Spain, the cost of solar power has reached grid parity, having fallen to the same price as purchasing it from the electrical grid (11).

Germany has been a leader in solar energy for many years and still retains the top spot for total installed capacity, with 35 gigawatts. According to the International Energy Agency's 2013 figures, here are the top ten countries for total installed solar capacity.

Most of this capacity has been built with the last five years. This partially explains why energy from solar power is still miniscule compared to other power sources. In the U.S., less than 1% of our energy comes from solar power (7). Italy, which has the highest percentage of power from solar energy, still only gets about 8%. These percentages are certain to rise as more solar capacity is added. China alone intends to install 13 GW of solar power capacity in 2014 (8).

In order for solar power to make further gains, the efficiency of solar cells will have to go up, and the price of solar cells will have to go down. The EIA expects nearly 100% increases in solar capacity in the U.S. between now and 2015. This will likely lead to a drop in prices as increased demand stimulates greater production. Meanwhile, there is a wide variety of research focusing on improving solar cell design and working with new materials to make solar cells cheaper and more efficient.

The Value of Birds Birds are present throughout almost every habitat across the globe. No matter where you go, there is always evidence of birds even if you don't see the animals themselves. Things like holes pecked in tree bark...