Modern wind power is a recent development based on a very old technology. The wind has propelled sail boats for at least 5000 years, and turned windmills for perhaps 1500 years. Even the concept of generating electricity with wind power dates back to the first successful attempt in the late 1800s. But aside from the first few kilowatt-generating facilities in the 1970s, the wind industry has essentially been built from scratch in the last fifteen years, and taken the world by storm. It's now the fastest growing power source in the world, with over 60 gigawatts (GW) of capacity installed in the U.S. alone. This rapid expansion is being driven by governments investing in alternative energy sources, subsidy programs to spur development, and advances in wind turbine technology.

In all wind turbines, the wind pushes the blades, which spin a shaft that cranks the electrical generator in the turbine. Turbines come in two main designs: a vertical turbine, which resembles a giant egg beater, and a horizontal turbine, which looks like a three-blade fan. Vertical turbines currently are not as efficient as horizontal turbines, so all wind farms today employ horizontal turbines. Large turbines typically stand about 100 meters (330 feet) tall. At these heights, the wind is stronger and more consistent. Strong winds are critical. The electrical output corresponds to the cube of the wind speed, so doubling the wind speed produces eight times as much power.

The location of where the turbines are sited matters as much as the turbines themselves. Wind strength varies from region to region, with the strongest winds found offshore. Despite this, there are currently no operational offshore wind farms in the U.S., though other countries, like Denmark, the U.K., and China, have made significant progress in this area. In the U.S., the strongest land winds occur in the Great Plains States, as shown in this map. 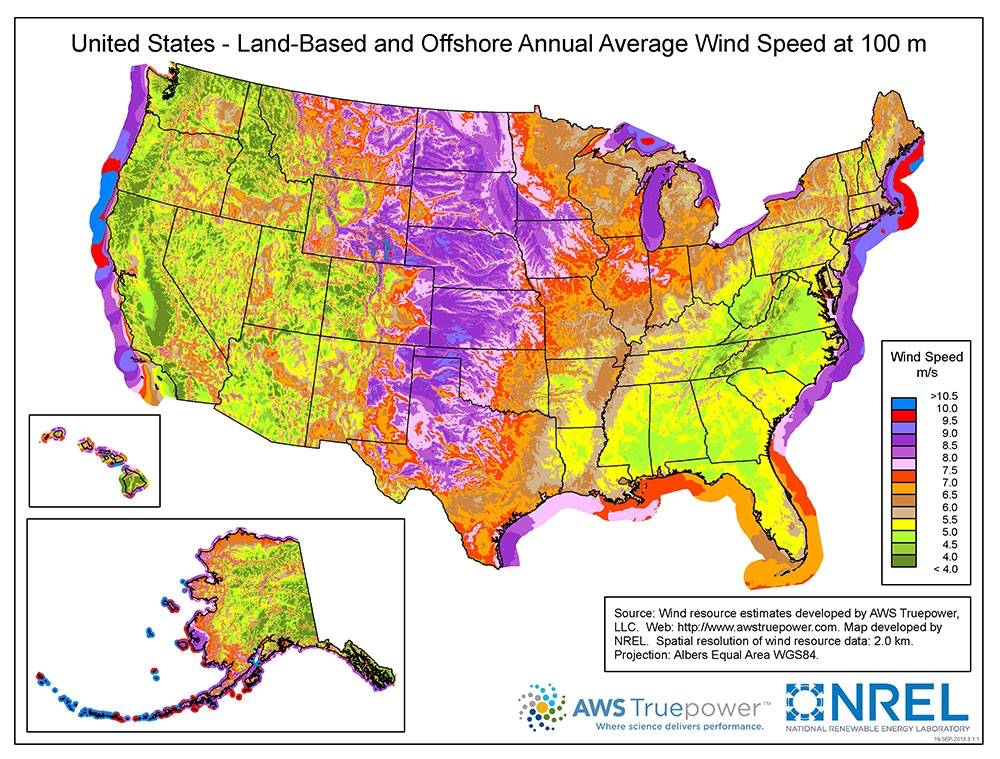 The Great Plains States have taken advantage this to become the major players in U.S. wind power. Along with California, Texas and Iowa are leaders in wind power capacity. Kansas and North Dakota, though smaller, generate upwards of 20% of their electricity from wind power.

Wind power is a free, renewable, clean energy source. It produces no greenhouse gases or pollution, and uses no water in the generating process, unlike other power sources. Turbines have relatively low maintenance costs. Wind power can be an effective alternative to diesel generators in remote rural areas. Ranchers and farmers can generate extra income by allowing wind farms to be built on their land.

Wind speeds are location-dependent and intermittent, though averaged out annually tend to be quite consistent. There is a high initial cost to build the turbines. Since most wind farms are in remote areas, there is the added challenge of getting the power to the electrical grid. There are still some associated environmental concerns, namely increased mortality rates of birds and bats.

Worldwide, there is over 300 GW of wind power capacity, as of the end of 2013. The top five leaders are:

Wind power capacity is growing at phenomenal rates and that trend is expected to continue. In 2008, the DOE announced a plan to have the U.S. produce 20% of its electricity through wind power by the year 2030. This will require improvements in turbine technology and transmission infrastructure.

According to the American Wind Energy Association, the industry employs over 50,000 people in fields like construction, manufacturing, research and training. Environmental planners analyze sites for wind farms. Environmental scientists work to reduce avian and bat mortality rates. Environmental lawyers work with permits and the regulatory process.

Defining Zoology Biological life on planet Earth is undoubtedly immense and the subject that studies it - biology - is such a vast area of study that no graduate in the subject could hope to understand all of it. Increasingly,...