What We Wish We Had Known before Majoring in Environmental Science

If given the chance to do it all over again, a small group of Environmental Science majors were asked what they wish they had known before they started. The list may surprise you! Some themes were more common than others, but you should find some helpful hints!

Chemistry is everywhere! These can be the some of the hardest classes, and yet, you need it as a biologist, a manager, a geologist, etc. Having a solid chemistry background is key to understanding many environmental systems. Even as a policy worker, you need to understand terms about loading, how metals will interact with substrates, and toxicity numbers. Chemistry can be a maker or breaker class for science majors, which is one of the reasons department advisors encourage you to get it done in the first year or two of an Environmental Science program.

Be Prepared to Compete

Many of your classes are graded on a curve. In that curve are the pre-med students, who MUST have high grades. So in order to also have a high grade, the freshman and sophomore level basic science classes are crucial to get high grades. Unfortunately, it may not be enough to understand the material, if you want to do well and go to graduate school; you need to out-compete the high-achievers. Most schools have tutoring systems in place. Some may be confined to the Greek system, but many are open to the general public. It may be worth an extra $50-$200/class to sit in and learn “how to test” just to get a good grade. You are probably already paying thousands for that class; why not do well in it? Luckily, this phenomenon generally goes away by graduate school and upper level classes. It isn't as lucrative for the tutoring companies to cater to a few students, and your pre-med students have moved on to other classes.

Finding employment after graduation really can be as much who you know, as what you know. Interact with your fellow students, if you are eligible for a work-study, take it! If you come across volunteer opportunities, do them! Stay engaged in your field, and network. You never know where your class mates will end up, and how that could help you down the line. Maybe someone will end up working for the National Science Foundation someday, and, knowing your work ethic as a student, help you gain grant money as a professor. Or perhaps a policy major will go on to become a lobbyist and will remember your name when a case comes in front of them. Record names of your fellow students, and keep track of them. Joining societies may seem like a waste of time, especially if they aren't science related, but maybe one of those students will go on to be a public personality. Just think how beneficial it would be to your future if you were able to call upon them for assistance in publicity on a noteworthy topic! 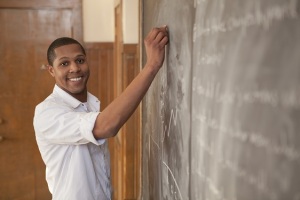 Lastly, do not be overwhelmed by changes from high-school. Classes can hold hundreds of students in basic science. Professors may have difficult accents to understand, especially if you grew up in one place, not having to distinguish between multiple dialects. Attendance may not seem to matter when the auditorium is holding 500 students, and no one is keeping attendance, but if you struggle on the first test, and then make yourself known to your professor during their office hours (the allotted times may seem meaningless but they are VERY important to know), they may be keeping an eye out for you. To you 500 students are overwhelming, but your professor may be used to it, and may be good at remembering faces from class to class. You have reached the big world, instead of being surprised by it, embrace it!

Jennifer Aicher
Jennifer Aicher has a Master's in Chemical Oceanography from the University of Miami and has spent many years travelling and studying the world's oceans.She has lived in upstate New York, Pennsylvania, American Samoa, Hawaii, Miami, and now calls the Florida panhandle her home.She has started an entire Marine Science college degree program, administrated water chemistry facilities, and conducted research around the globe.Throughout her career she has also been a grant writer, administrative writer, published weekly newspaper columns, and scientific content writer.She continues to write a series of books for pre-school aged children.
Latest posts by Jennifer Aicher (see all)

Out of all the ways we power the planet, nuclear energy may be the most divisive. When it first began as an offshoot of nuclear weapons programs, it seemed to promise unlimited electricity that would power a new atomic age....