Hydroelectric power uses the kinetic energy of moving water to produce electricity. It's the most widely used form of renewable energy, generating 19% of electricity worldwide (1). While large-scale projects have had mixed results in the developing world, when done properly, hydroelectric is a cheap, clean and effective method of producing energy.

Most hydroelectric power plants are located on a river at a high elevation, using a dam to hold back the water in a reservoir. When released, the water flows into the dam through a pipe called a penstock. The force of the falling water pushes a turbine, which turns an electric generator. The steeper the drop, the more power the water has, creating more energy.

Another method is a run-of-the-river diversion, where instead of the water being held back, it's diverted from the river through a penstock to the turbines, and then released back to the river. Hydroelectric power isn't just confined to rivers. Ocean waves, tides and currents are also tapped to provide energy, although current capacity is being utilized on a vastly smaller scale than traditional hydroelectric dams. 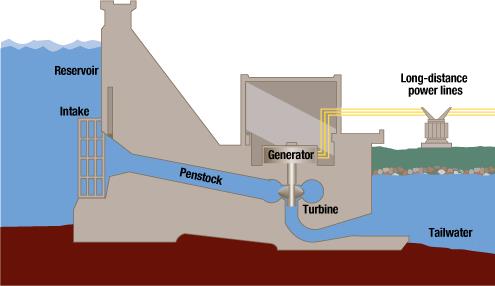 Hydroelectric power is also cost-effective, with a national average of 9 cents per kilowatt-hour in the U.S., which compares quite favorably to solar (11 cents / kWh), coal (9 cents / kWh) and natural gas (6 cents / kWh) (3). ,Places with abundant water sources, like the Pacific Northwest, have even cheaper rates. This is one reason why Washington, Oregon and Idaho get more than 50% of their electricity from hydroelectric power, compared to the national average of 6-7% (4). Some countries, like Norway, have enough hydropower resources to generate all or nearly all of their electricity. Worldwide, the top five leaders in hydropower capacity are China, Canada, Brazil, the U.S. and Russia (5).

Once built, hydroelectric plants have very low operation and maintenance costs. A hydropower plant can stay in service for 50-100 years (6). Unlike other forms of renewable energy, hydroelectric has the ability to rapidly scale up to maximum output levels when extra power is needed. It's a very clean form of energy, producing no air or water pollution, and produces small amounts of greenhouse gases (methane released from rotting vegetation submerged under the reservoir).

On the other hand, hydroelectric plants cost hundreds of millions of dollars to build and take many years to complete. Damming a river with a large hydroelectric plant can submerge tens or even hundreds of square miles of land under its reservoir (7), altering the local ecosystem both in the reservoir area and further downstream. Dams can result in loss of habitat and loss of migratory routes for species such as salmon. People can also be affected. Any homes in the reservoir's flood zone will be submerged and the residents forced to relocate. As one example, over a million people were moved during construction of China's Three Gorges Dam (8). And while water is a renewable resource, a hydroelectric plant's output is affected by seasonal variations in water supply.

In the U.S., future construction is limited, as most prime locations for hydroelectric dams have already been utilized. However, the Energy Department reports that of the 80,000 dams in the country, only 3% are used to generate power. Retrofitting those dams with hydroelectric plants could add an additional 12 GW of electricity to the national grid. There is continued research into ways to mitigate the environmental impact of dams. Power from ocean waves could be the next big renewable energy source, with a stunning 1000+ terawatts of potential resources along the U.S. coast alone, according to the Electric Power Research Institute.

With Palynology We Can See the Tiniest Details

The study of the people of the past is called archaeology. The discipline has been around for several hundred years but has undergone vast change in that time. The romantic ideal of the treasure hunter searching for items of national...