The dictionary defines drought as “a period of dry weather” or “an extended shortage (1).” Drought has always been difficult to define because it varies based on location and associated impacts to the human and natural environment (2). In all cases, drought is temporary in nature, tends to be cyclical and results in an abnormal extended decrease in water available to humans, plants and wildlife. There are generally four types of drought: Hydrological, Socioeconomic, Meteorological and Agricultural (5). There is some debate if socioeconomic and hydrological types are independent or two faces of the same coin.

Hydrological drought occurs when water reserves in aquifers, lakes or reservoirs drops below an established pre-defined storage level. Historical water use data and predictive models are used to determine the cache of water on reserve. Socioeconomic drought focuses specifically on human supply and demand. It should be noted that when the needs for public drinking water exceed the reserves there would be a drought even if the amount of precipitation were normal. This is of particular concern where water is transported a long distance and high growth areas.

Meteorological drought is the type discussed in the dictionary definition and the one that comes to mind first. It is the reduction of water over time due to the lack of precipitation. There are at least four triggers that must be met before being classified as a meteorological drought depending on the geographic location. The trigger established for the United States is less than 2.5mm of rain within 48 hours (3).

Weather has been recorded for over 100 years within the United States and there have been a handful of severe droughts with each lasting up to 8 years within that period including the infamous Dust Bowl (4). Most of the severe droughts were cyclical in nature as shown in the table to the left. The most recent nationwide drought occurred during 2012 and the earliest evidence of drought are found within the geological record and tree rings prior to the written record. 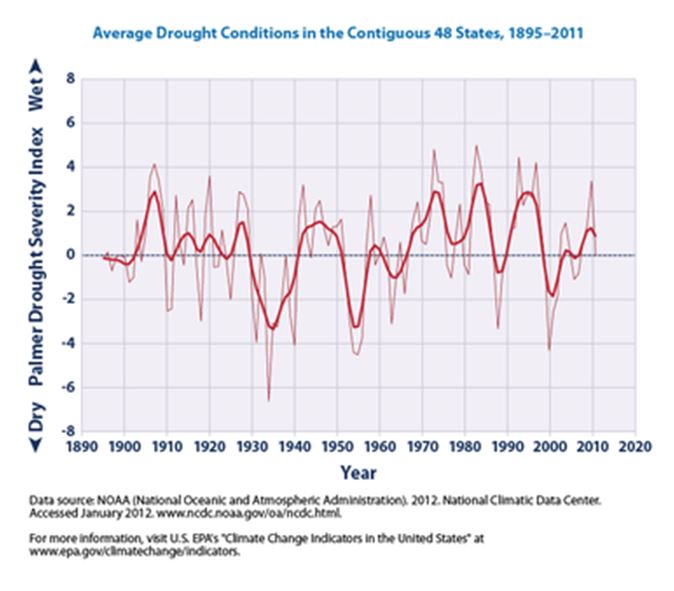 The Dust Bowl occurred from 1933 to 1940 and was the one we learned the most from including lessons learned and best practices. This drought ushered in an era that revolutionized the agricultural community with new cultivation and land management techniques. The drought covered over 70% of the United States and impacted over 50 million acres of land during the worst of it. The lack of precipitation and ineffective cultivation techniques caused a mass loss of landcover such as crops, grass and vegetation. As such, there would be huge dust storms that were called “black rollers (6).” Interestingly a large amount of the fugitive dust found its way into the Atlantic Ocean.

The 5 year Texas Drought during the 1950s encompassed the great plains and periodically covered just about the entire United States. The drought started in 1950 and lasted through 1956. The cause was a combination of low amounts of precipitation and high temperatures. There were large economic consequences since crop yields were 50% less than normal during the drought and hay was not available nor affordable for livestock feed. Approximately 244 out of 254 Texas counties were declared a federally designated emergency by the last year of the drought.

The 3 year drought of the late 1980s hit California the hardest and covered approximately 36% of the United States. Even though it was not physically large compared to previous droughts, it was considered the most expensive in recorded history endured by the United States up to that time with approximately $39 billion in damages (7).

Who Is Affected by a Drought?

Droughts affect just about every human within the region and have the potential to spread nationwide or worldwide depending on the economic damage. If the drought covers an extended period of time or is especially harsh, conflicts arise between individuals over water rights and land value is impacted. Droughts have the potential to alter the quality of life through the loss of land, livelihood or health consequences from lower water and air quality. Water quality lowers because contaminates become more concentrated as the water evaporates (10). Air quality lowers due to an increase in particulate matter as a result of greater soil erosion. 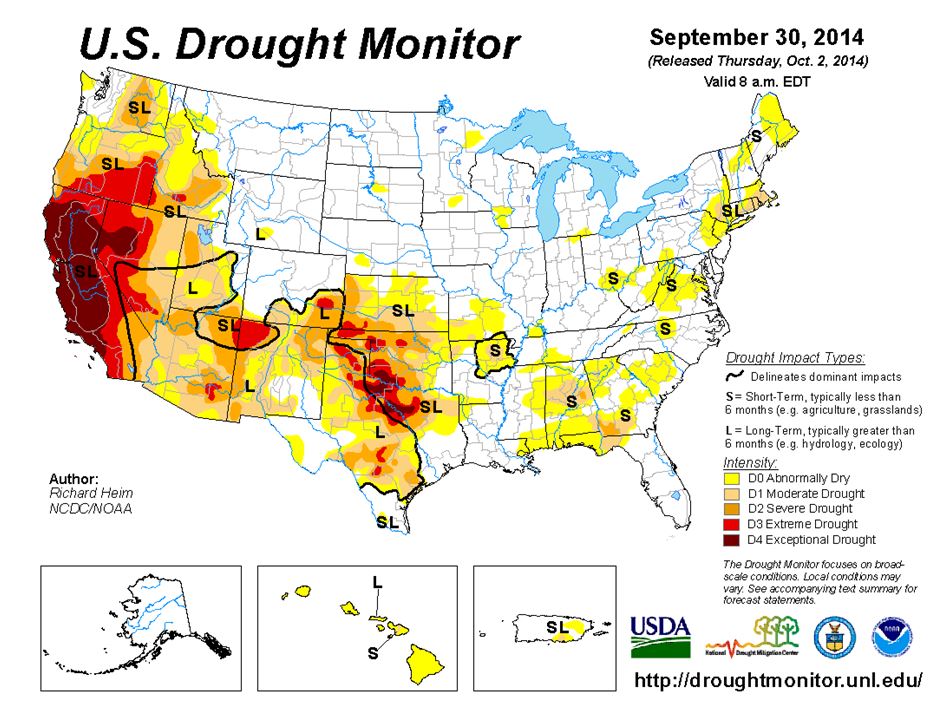 The economy suffers as a result of droughts with increases in the cost of producing crops and livestock and increased consumer costs of food. Costs for raw materials, such as lumber, increases for both the manufacturer and the consumer. Power costs could also rise for consumers along the coasts. Up to 15% of power in California comes from hydropower plants that require water as an energy source (9).

Ecosystem effects of drought can be seen with changes in migration patterns, lower water quality and increased soil erosion. Threatened and endangered species are more sensitive to habitat changes, food scarcity and can be disproportionately affected. Severe drought conditions increase the likelihood of wildfires and have the potential to increase their intensity. The food chain can become contaminated depending on the water quality and duration of the drought.

Are There Certain Locations within the United States Sensitive to Drought?

The western half of the United States tends to be under more frequent and intense drought conditions. Arid regions tend to be sensitive to variations in precipitation or water usage (11). All of the United States have experienced drought and it is a national concern. Weather patterns, such as El Nino, and climate change heavily impact drought cycles.

What Is Being Done to Prepare for Droughts?

Municipalities and water control boards create drought preparation and mitigation plans particularly if they are in drought prone areas. There are at least four parts to the plan: prediction, monitoring, assessment and mitigation (3).

Monitoring has been traditionally accomplished through establishment of indicators and triggers. This usually is a variation of mild, moderate, severe and extreme. Drought indicators are a combination of empirically and observation based. This includes data from rain gauges, climate patterns, reservoir level gauges, crop data, land use information and satellites. 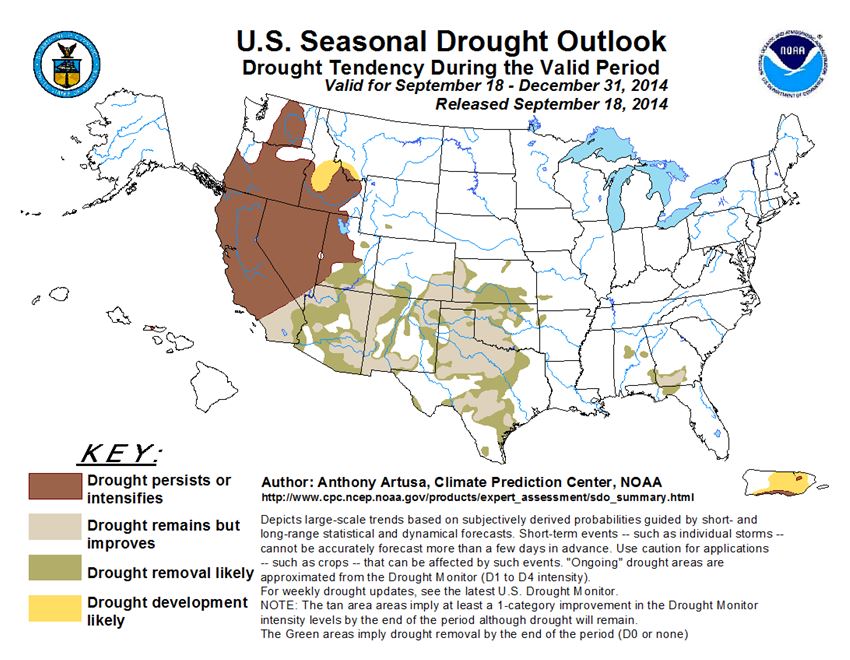 Assessment involves comparing the actual data with the prediction models to see how close they align. The results will used for prediction models in the future. A significant portion of assessment is comparing the actual data to the established indicators and triggers from the monitoring. The level of drought will dictate mitigation measures proposed.

Mitigation measures correlate to the severity of the drought and the goal is to minimize adverse effects as long as possible. Examples include increased public awareness, water restrictions, finding other sources of water to add to the existing supply, implementing agricultural techniques and decrease overall demand. Overall demand could be decreased through incentive programs. Nevada implemented a “cash for grass” program for residents that installed drought tolerant landscaping called xeriscaping.

What Can I Do to Help?

There are multiple actions you can take on a personal or household level. Get involved with the municipal planning process to gain a better understanding of the conditions where you live. Limit your use of water through everyday actions such as shorter showers, less frequent watering of the lawn and upgrading appliances that use less water and are energy efficient.

The study of the people of the past is called archaeology. The discipline has been around for several hundred years but has undergone vast change in that time. The romantic ideal of the treasure hunter searching for items of national...