How Does Radiocarbon-14 Dating Work?

What is Radiocarbon Dating?

Radiocarbon dating is a method of what is known as “Absolute Dating”. Despite the name, it does not give an absolute date of organic material - but an approximate age, usually within a range of a few years either way. The other method is “Relative Dating” which gives an order of events without giving an exact age (1): typically artefact typology or the study of the sequence of the evolution of fossils.

There are three carbon isotopes that occur as part of the Earth's natural processes; these are carbon-12, carbon-13 and carbon-14. The unstable nature of carbon 14 (with a precise half-life that makes it easy to measure) means it is ideal as an absolute dating method. The other two isotopes in comparison are more common than carbon-14 in the atmosphere but increase with the burning of fossil fuels making them less reliable for study (2); carbon-14 also increases, but its relative rarity means its increase is negligible. The half-life of the 14C isotope is 5,730 years, adjusted from 5,568 years originally calculated in the 1940s; the upper limit of dating is in the region of 55-60,000 years, after which the amount of 14C is negligible (3). After this point, other Absolute Dating methods may be used.

Today, the radiocarbon-14 dating method is used extensively in environmental sciences and in human sciences such as archaeology and anthropology. It also has some applications in geology; its importance in dating organic materials cannot be underestimated enough. In 1979, Desmond Clark said of the method “we would still be foundering in a sea of imprecisions sometime bred of inspired guesswork but more often of imaginative speculation” (3).

Radiocarbon dating may only be used on organic materials. Typically (6):

The above list is not exhaustive; most organic material is suitable so long as it is of sufficient age and has not mineralised - dinosaur bones are out as they no longer have any carbon left. Stone and metal cannot be dated but pottery may be dated through surviving residue such as food particles or paint that uses organic material (8).

There are a number of ways to enter into a career in studying radiocarbon dating. Typically, a Master's Degree in chemistry is required because of the extensive lab work. Increasingly though, students are learning about the principles of radiocarbon dates in archaeology, palaeontology and climate science degrees and can combine cross-disciplinary studies.

The method developed in the 1940's and was a ground-breaking piece of research that would change dating methods forever. A team of researchers led by Willard F. Libby calculated the rate of radioactive decay of the 14C isotope (4) in carbon black powder. As a test, the team took samples of acacia wood from two Egyptian Pharaohs and dated them; the results came back to within what was then a reasonable range: 2800BC +/- 250 years whereas the earlier independent dates (largely the dendrochronology records) were 2625 +/- 75 years (3), (5). Archaeologists had used Relative Dating methods to calculate their reigns. Though their initial calculations were slightly incorrect thanks to the contaminants of extensive nuclear testing of the age, scientists soon discovered the error and developed methods that were more accurate, including a date of calibration to 1950. This new method was based on gas and liquid scintillation counting and these methods are still used today, having been demonstrated as more accurate than Libby's original method (3). Willard Libby would receive a Nobel Prize for Chemistry in 1960.

The next big step in the radiocarbon dating method would be Accelerated Mass Spectrometry which was developed in the late 1980s and published its first results in 1994 (3). This was a giant leap forward in that it offered far more accurate dates for a far smaller sample (9); this made destruction of samples a far less delicate issue to researchers, especially on artefacts such as The Shroud of Turin for which accurate dates were now possible without damaging a significant part of the artefact. AMS counts the quantity of 14C in a sample rather than waiting for the isotope to decay; this also means greater accuracy readings for older dates.

The 14C isotope is constantly formed in the upper atmosphere thanks to the effects of cosmic rays on nitrogen-14 atoms. It is oxidised quickly and absorbed in great quantities by all living organisms - animal and plant, land and ocean dwelling alike. When an organism dies, it stops absorbing the radioactive isotope and immediately starts decaying (7). As previously mentioned, the half life of the 14C isotope is 5,730 years - this means that it takes 5,730 years to reach half the radioactivity that the organism had at the point of death, another 5,730 years to reach 25% radioactivity it had at the point of death and so on. Radiocarbon dating is simply a measure of the level of 14C isotope within the organic remains (8). This is not as clear-cut as it seems as the amount of 14C isotopes in the atmosphere can vary. This is why calibration against objects whose age is known is required (14).

AMS works slightly differently; it converts the atoms of the sample into fast-moving ions so that they become charged atoms. By applying magnetic and electrical fields, the mass of these ions is measured and the accelerator is used to remove ions that might contaminate the dating. The sample passes through several accelerators in order to remove as many atoms as possible until the 14C and some 12C and 13C pass into the detector. These latter atoms are used as part of the calibration process to measure the relative number of isotopes (9).

How is a Date Calibrated?

When the half-life was corrected in 1950, the year was taken as a base date from which to calculate all resulting dates. Therefore, any expression of “before present” will mean “before 1950”. It is presumed that the proportion of atmospheric 14C is the same today as it was in 1950 (10), (11) and that the half-life remains the same. If a radioactivity level comes back as half of what would have been expected if the organism had died in 1950, then it is presumed to be 5,730 years before 1950. This does not mean that we have a precise year of 3780BC, it means we then need to calibrate through other methods that will show us how atmospheric concentrations of the 14C isotope has changed - most typically through the dendrochronology records (tree ring data) (10). Very old trees such as North American Bristlecone Pine are ideal for constructing long and accurate records of the state of the atmosphere. This allows researchers to account for variation by comparing the known records of 14C levels in the tree record, looking for a tree record that has the same proportion of radiocarbon. The overlapping nature of the tree records means this is the most accurate record we have. There will of course be several possible calendar years within the expected range, which is why radiocarbon dates come with a variation such as +/- 25 years for example (11).

Archaeology was one of the first, and remains the major, disciplines to use radiocarbon dating and this is why many enter into the lab through combining chemistry and archaeological studies. It has a greater impact on our understanding of the human past than in any other field.

Radiocarbon dating is profoundly useful in archaeology, especially since the dawn of the even more accurate AMS method when more accurate dates could be obtained for smaller sample sizes. One good example is a critical piece of research into the diet of the fragile Viking colonies of Greenland (13) for example; the study examined not just the 14C dates of the people in the graves, but was also in examining their diet through examining the carbon isotopes themselves. The study concluded dates that were already suspected but not confirmed: that the colony was occupied between the late 10th century and the early 12th century. Radiocarbon AMS was also used to calculate when the last Vikings departed Greenland (17).

There has been much debate about the age of The Shroud of Turin. It has become an important relic for many Catholics. The debate raged on for the decades after its discovery. Experts pointed to its medieval design, depiction of Christ and several other key factors marking it as in the region of 700 years old. It wasn't until 1988, and several subsequent tests since then, that this was confirmed (14); it is now the best-known example of the success of the AMS method as countless tests have been carried out and confirmed the dates. A significant portion of the Shroud would have been destroyed using the older method. The paper for the 1988 study is available online (15). Each subsequent test has come back with dates of the mid 14th century. 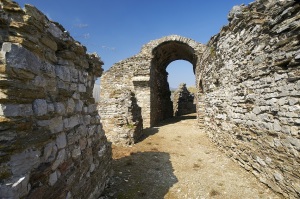 Landscape Archaeology is a bridge between archaeology and environmental sciences though many consider it an environmental science in its own right. It is the study of how people in the past exploited and changed the environment around them. Typically, this will involve examining spores and pollen to examine when land was cleared of scrub and trees in the Neolithic Revolution to make way for crops. It also makes use of phytoliths, entomological remains, GIS (digital mapping), soil sampling, bone analyses, ground penetrating radar, and map studies and other documentary data. It has been fundamental, especially in Europe, to demonstrating how landscapes are relics and monuments in themselves and are worthy of study as such. Returning to the example of the Vikings in Greenland above, the extended study and dating of the faunal remains shows distinct changes that were made by the Vikings. The studies show the approximate date of arrival of European livestock and crops (13) and when these finally disappeared from the record (17). Studies such as this are fundamental to determining not just how the environment has changed thanks to human manipulation, but also to natural changes due to fluctuations in the environment and climate.

The practical uses of radiocarbon dating in climate science covers similar examples to the archaeological examples seen above (changes in fauna and vegetation for example) but it is fundamental in other areas too (12). Most critically, it is used when studying ice core date in determining the composition of the climate of the past. Many hundreds of ice samples have been taken in Antarctica and this is fundamental to understanding how we are changing the climate today, and how it may change in future when accounting for fluctuations in atmospheric carbon (18). There are complications however and researchers check the known ice records against any new samples, taking into consideration known ice dates in factoring in their margin of error. Atmospheric composition, the amount of ice coverage at a given time… all of these factors are important in examining past climates (19).

Phytolith studies (fossilised plant remains), entomology (study of insects) as well as the previously mentioned studies of pollen and spores can not only show how an environment changed and what caused it (human engineering or environmental change), but also when the changes occurred.

Matthew Mason
MG Mason has a BA in Archaeology and MA in Landscape Archaeology, both from the University of Exeter. A personal interest in environmental science grew alongside his formal studies and eventually formed part of his post-graduate degree where he studied both natural and human changes to the environment of southwest England; his particular interests are in aerial photography. He has experience in GIS (digital mapping) but currently works as a freelance writer as the economic downturn means he has struggled to get relevant work. He presently lives in southwest England.
Latest posts by Matthew Mason (see all)

Invasive Species: How They Affect the Environment

Why Environmental Engineering Is Vital for Our Future

What We Wish We Had Known before Majoring in Environmental Science

If given the chance to do it all over again, a small group of Environmental Science majors were asked what they wish they had known before they started. The list may surprise you! Some themes were more common than others,...