The Arctic encompasses the northernmost area of the world. It is characterized by the sheer size of the region, the frozen nature of the area and is one of the last remaining places on Earth that does not have clear political claims (1). In spite of the harsh environment, the area is brimming with life including uniquely adapted animals, vegetation and humans. There are hundreds of indigenous tribes within the region. The United States joined the elite status of an Arctic state when it purchased Alaska from Russia in 1867 (2).

The polar ice cap has been melting and getting smaller at an alarming rate as a result of climate change. The ice cap historically consisted of layers of ice that took years to develop. Even in the summer months when the ice would seasonally melt, the density would get thinner but would be sufficient to remain year round. In recent years, the ice has become less dense which means it does not build up as many layers from year to year. Older ice is thicker and stronger than newer ice. If the current trend continues, the summer ice is anticipated to be virtually gone by 2040 (3). The Environmental Protection Agency (EPA) has published data showing the ice cap was 700,000 square kilometers less in 2013 than in 1979 as shown in Figure 1 below (4). 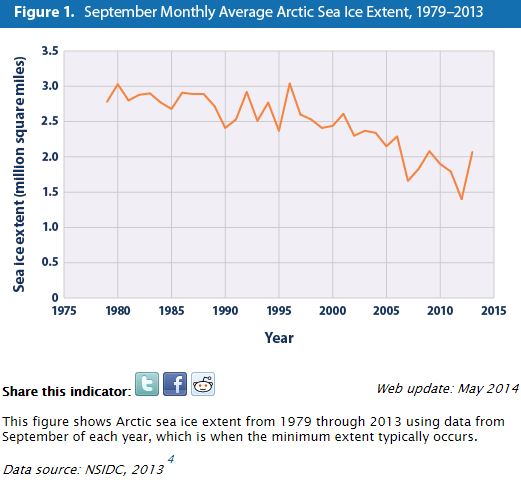 The result of the melting ice within the Arctic region will fundamentally change the ecosystem, indigenous tribal culture, business and trade environment. For the first time, the ability to extend oil and gas production and to establish shipping lanes are realities on the horizon. The United States has become actively involved with the Arctic region through development of an Arctic Policy in 2013, Arctic Implementation Plan in 2014 and participation on the Arctic Council. The National Oceanic and Atmospheric Administration (NOAA) has taken the lead within the United States for studying and developing indicators of the Arctic ecosystem and climate (5). They have teamed with numerous countries including Russia with the Russian-American Long Term Census of the Arctic (6) and Iceland with the Arctic Maritime and Aviation Transportation Infrastructure Initiative (7).

The United States developed an Arctic policy in 2013 with the formidable goals of sustainability whereas the benefits are realized without creating adverse impacts to the region (8). There are economic opportunities associated with minerals and increased commerce within the area. Infrastructure is needed to support these opportunities. At the same time, care must be taken to protect and conserve resources as much as possible. This also rekindled the interest in joining the Law of the Sea Convention. The United States was a member of the Law of the Sea Convention but did not ratify the agreement. If ratified, the agreement would provide the ability for the United States to claim 200 nautical miles from the shelf within the Arctic Ocean for exclusive economic use.

The policy established a baseline of strategic goals for the arctic region and the implementation plan expands on the strategic goals in more detail. The arctic region does not have clearly defined political boundaries similar to the defined boundaries established by the Antarctic treaty. Some of the guiding principles of the policy are to continue peaceful stability of the region, include the indigenous tribes in the process, rely on scientific data to guide informed decisions about the region, use innovative agreements and partnerships to collect more information on the area and prioritize the strategies.

NOAA prepared an action plan in 2014 with six strategic initiatives (9). They will work towards improving the weather forecasts and warning systems, better understand the ecosystem through scientific study, continue to improve the ability to forecast sea ice, lead resiliency efforts that will maintain or improve communities and the economy, improve partnerships with agencies and political bodies and continue stewardship for resources.

The goal is to proactively plan the new possibilities of shipping lanes and mineral/oil extraction activities rather than respond to the emerging markets. It should be noted that some countries, such as Korea, have successfully used an arctic route for shipping but it is a rarity (10). These policies are also timely as the United States is a member of the Arctic Council and will assume a 2-year leadership term beginning in 2015.

There are eight nations and six indigenous groups that encompass the Arctic region. This group is also called the Arctic State. The nations include Canada, Denmark, Finland, Iceland, Norway, Russia, Sweden and the United States. Greenland and the Faroe Islands are included under Denmark. These nations founded the Arctic Council. The purpose of the Arctic Council is to address sustainability and environmental protection issues for the region. Normally, the Foreign Minister represents each country on the Council. The Department of State leads the effort for the United States with the Secretary of State representing the country. The Council meets every 2 years and rotates leadership among the members. Six working groups are part of the Council including the Arctic Contaminants Action Program, Arctic Monitoring and Assessment Program, Conservation of Arctic Flora and Fauna, Protection of the Arctic Marine Environment, Sustainable Development Working Group, Emergency Prevention Preparedness and Response (11). The Arctic Council is a voluntary group that is reaching a consensus through their programs and plans. It will be interesting to see how the Council evolves over the next couple of years.

There are multiple potential issues that must be addressed in order to remain proactive in the Arctic Region. History has shown undesirable consequences when indigenous cultures conflict with potential economic benefits of other countries. The only body that involves all Arctic countries is the Arctic Council. The Council is a voluntary organization without a treaty or formal agreement. While indigenous groups are members of the Council, it may not be enough involvement to ensure their interests are protected. Political conflict can be minimized if the process was formalized and included a conflict resolution process.

It is estimated that an Arctic shipping route would provide economic benefit through shorter shipping time and fuel efficiencies for some countries. The establishment of trade routes is a matter of time and should be carefully planned to minimize adverse impacts. This includes the impacts associated with increased consumption of resources unique to the Arctic, potential worsening of black carbon, introduction of invasive species that could accelerate the extinction of native species and the continual alteration of the ecosystem.

Lengthening of mineral, oil and gas extraction seasons have the potential to impact local economies, ecosystem and quality of life within the area. The potential impacts will need to be studied further in order to find a balance.

The United States has started the first step of studying the existing conditions in order to gain an understanding of area and identify risks. This information will be used to help formulate and plan political interests in the area.

Solar power is the conversion of the sun's energy into electricity. With an estimated 173,000 terawatts of solar energy continuously hitting Earth's surface (1), there is more than enough energy to meet the world's current consumption levels of 15 terawatts...